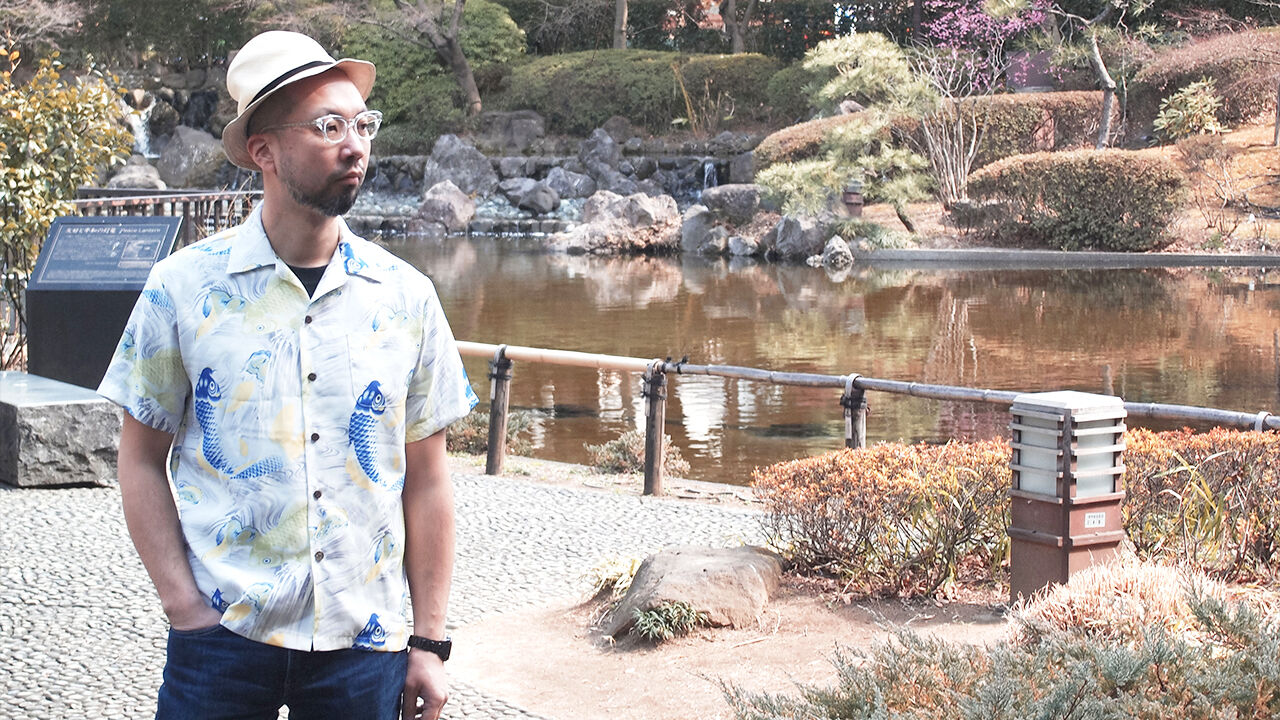 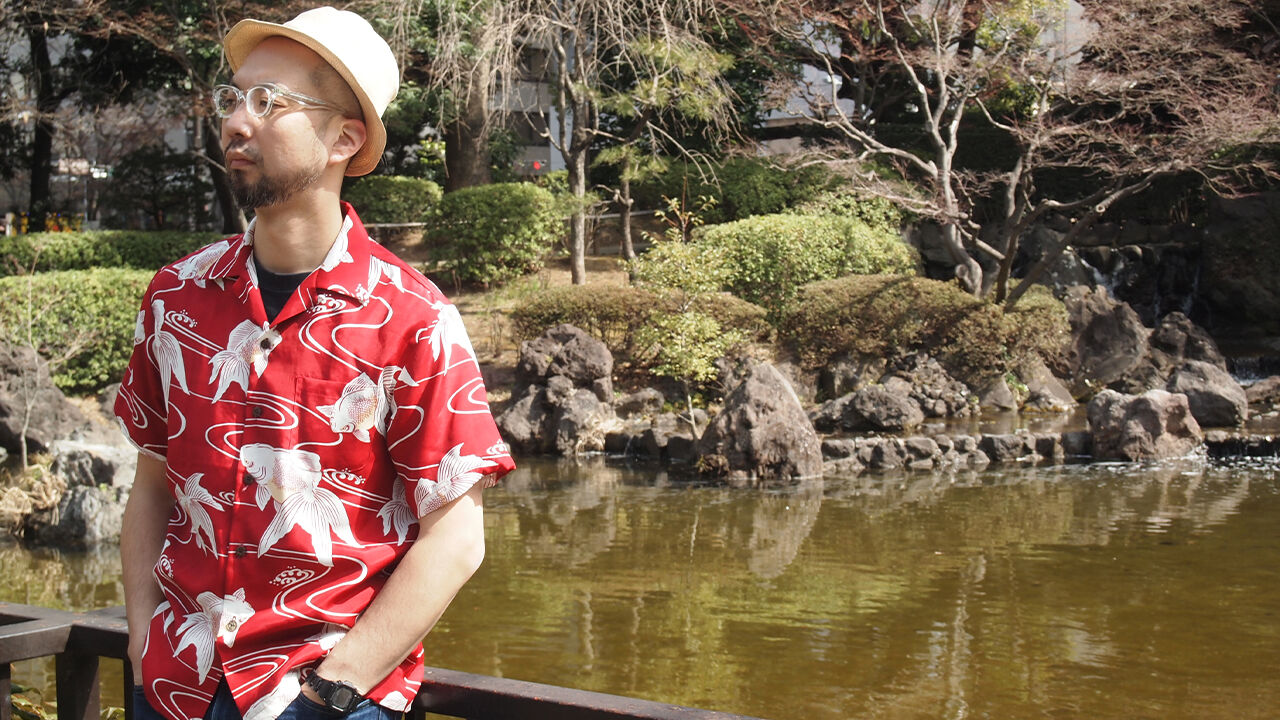 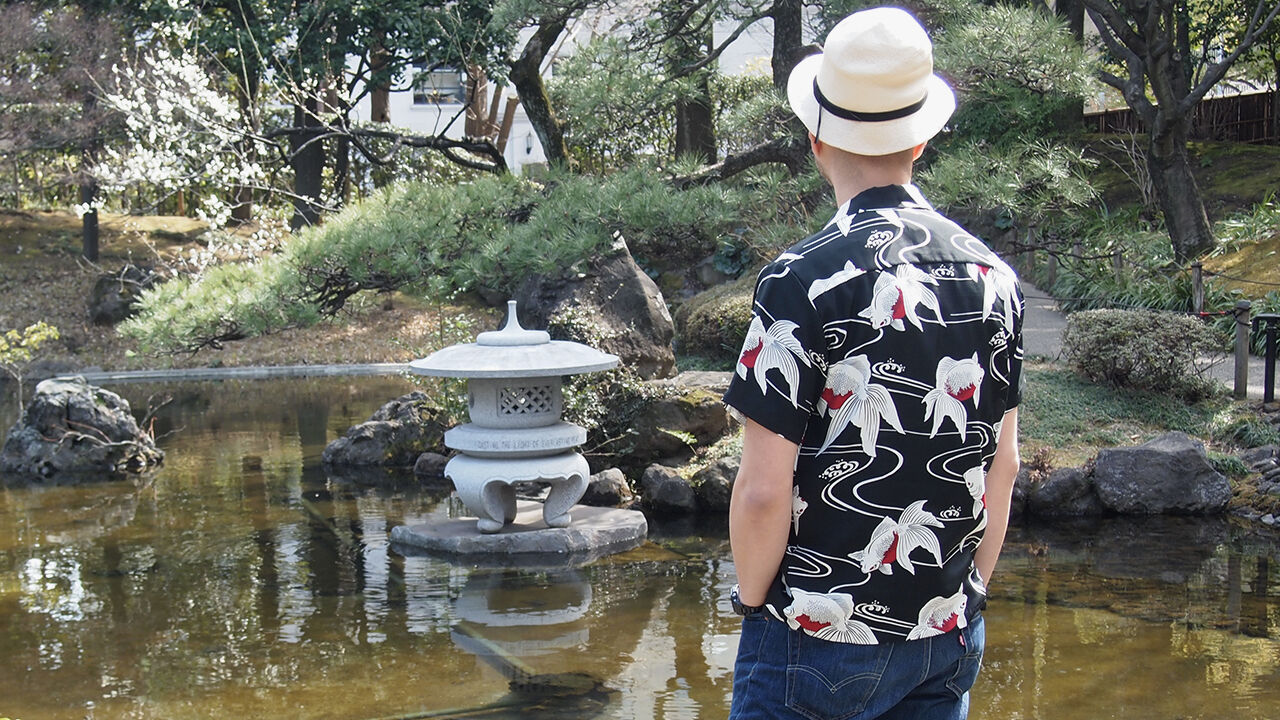 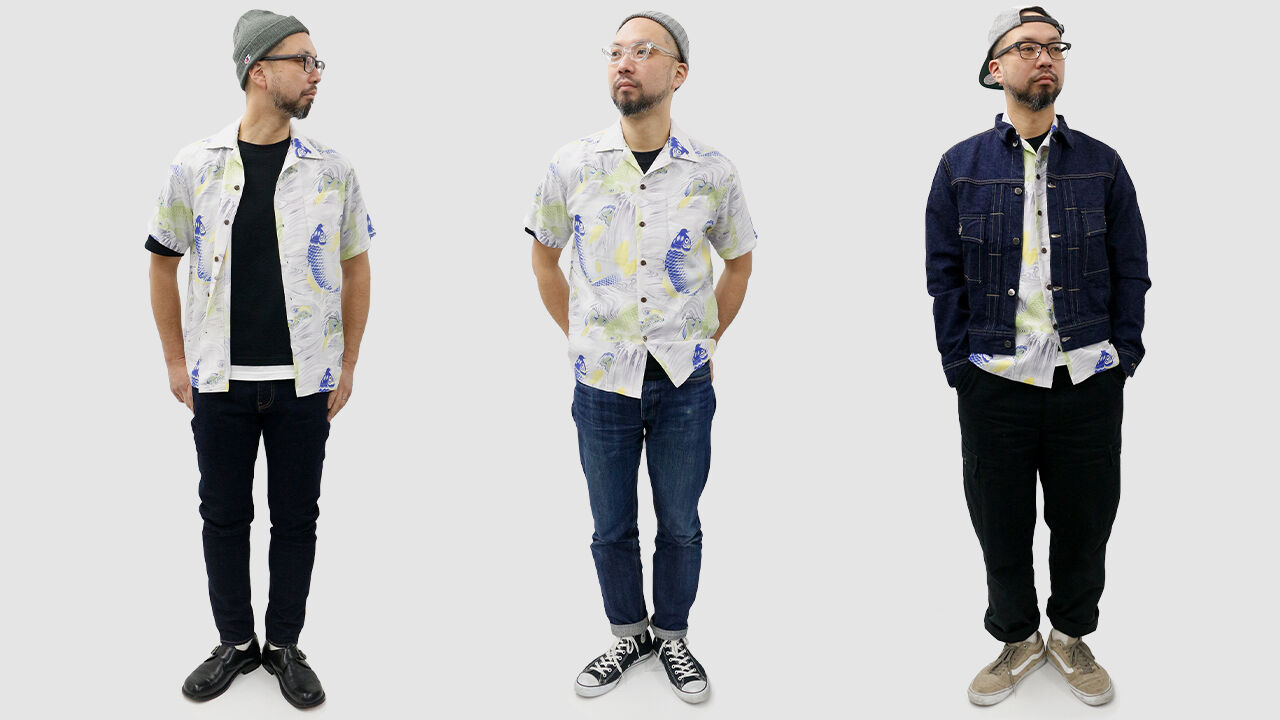 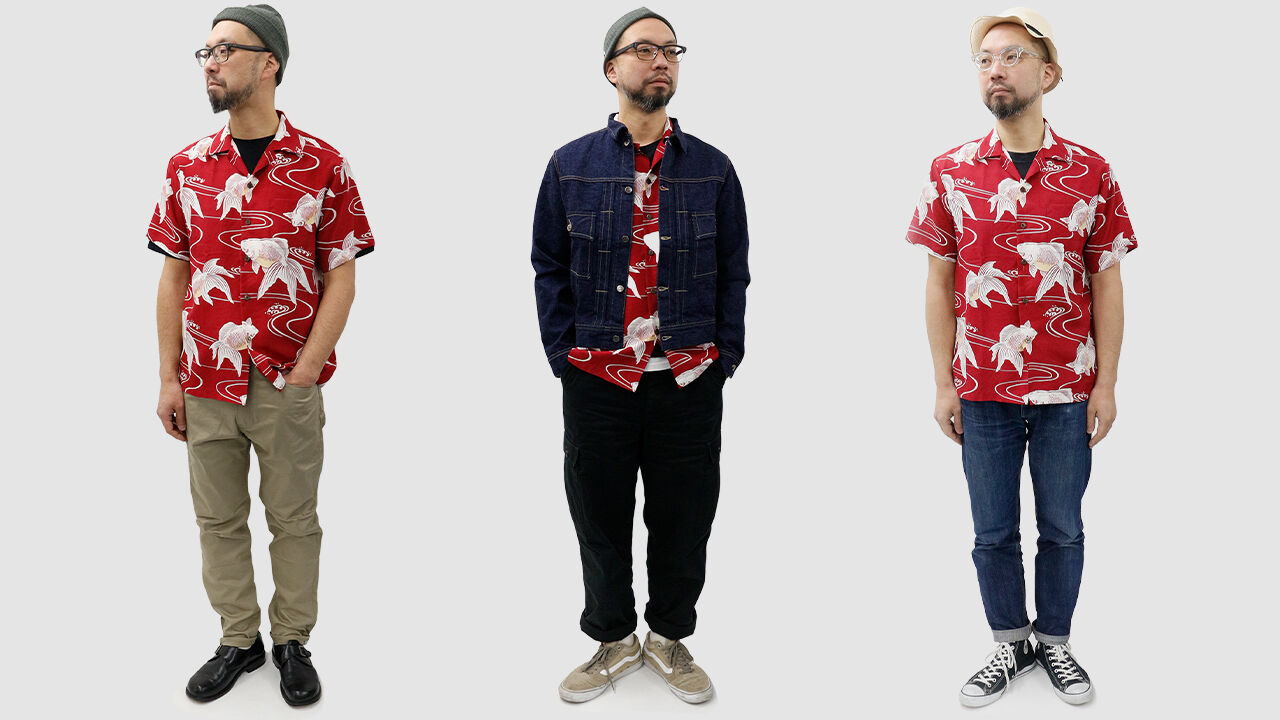 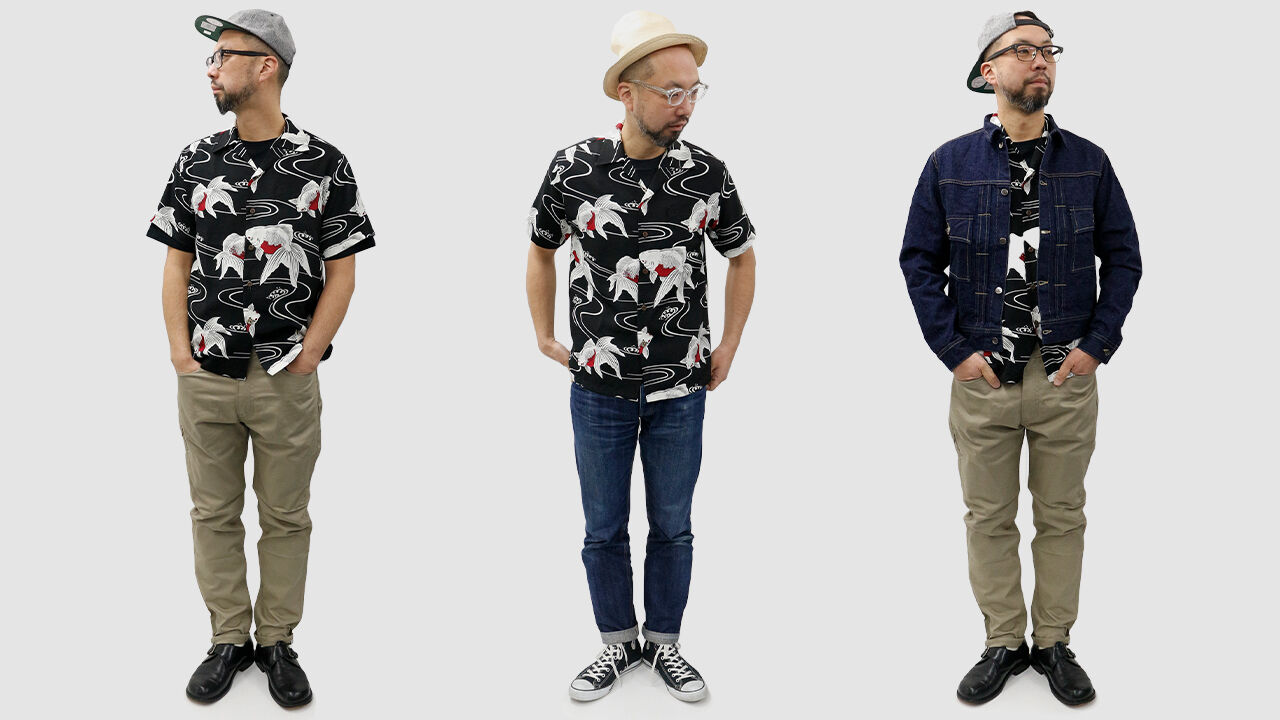 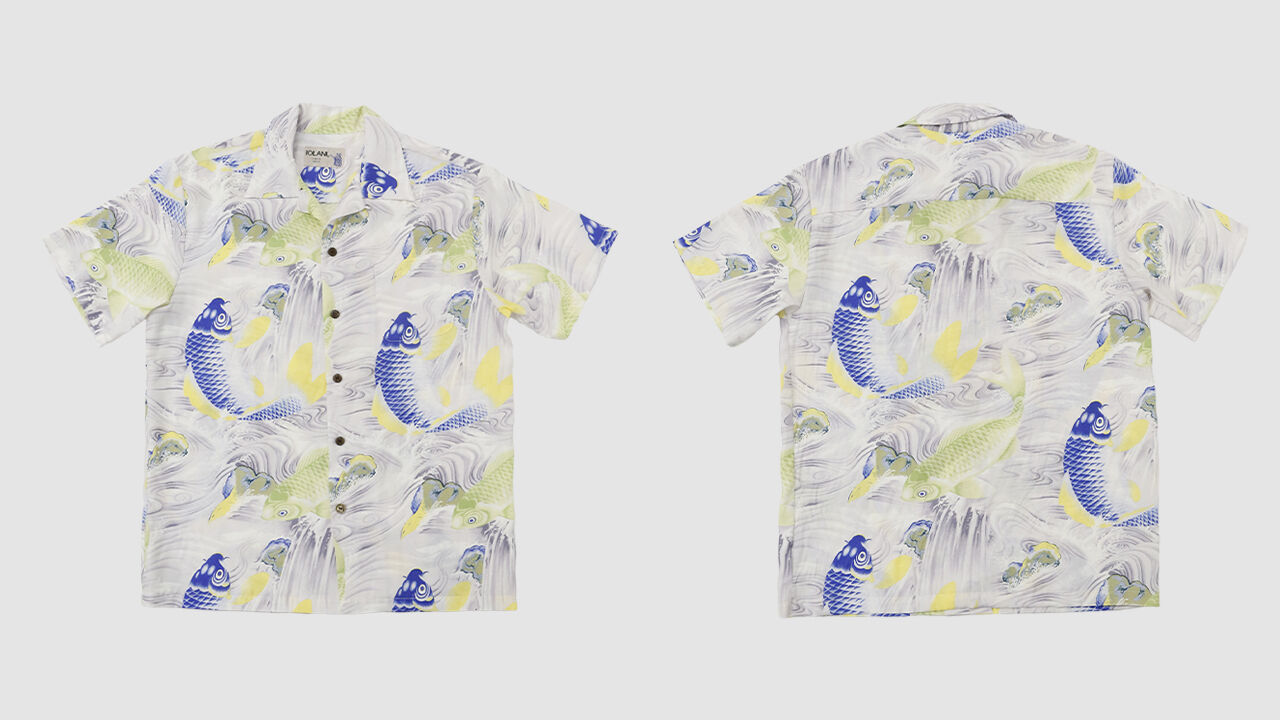 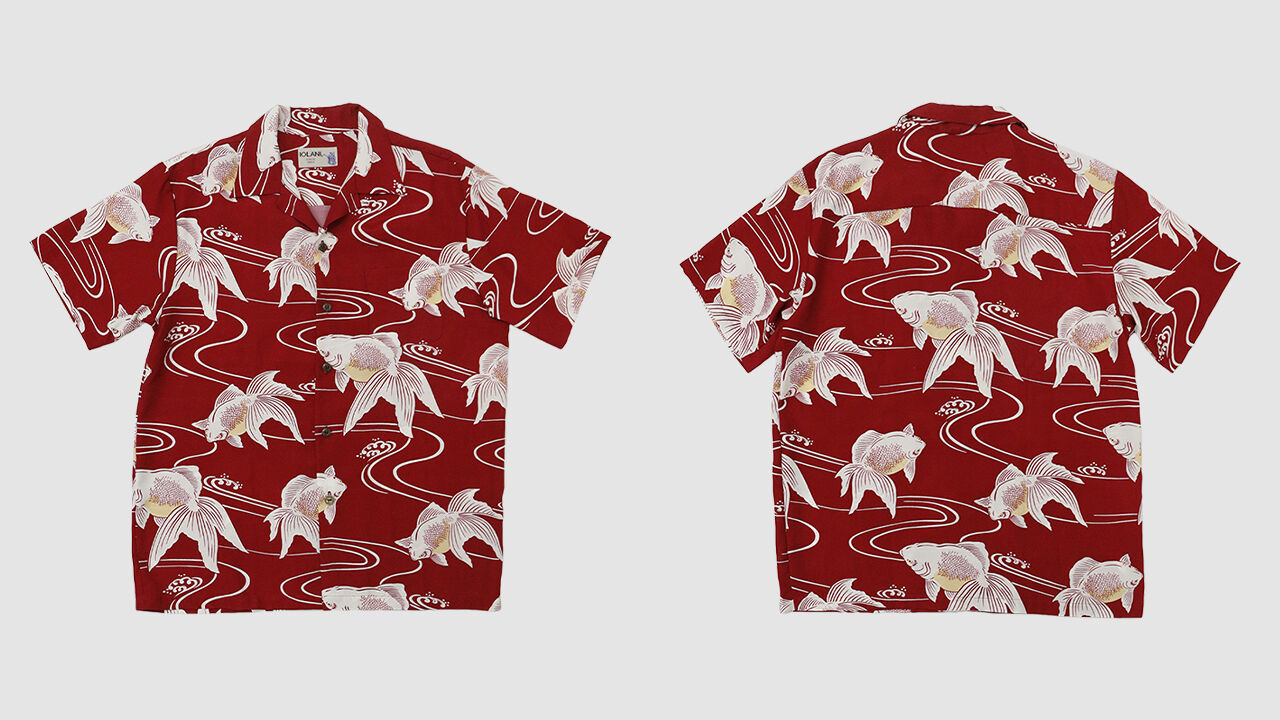 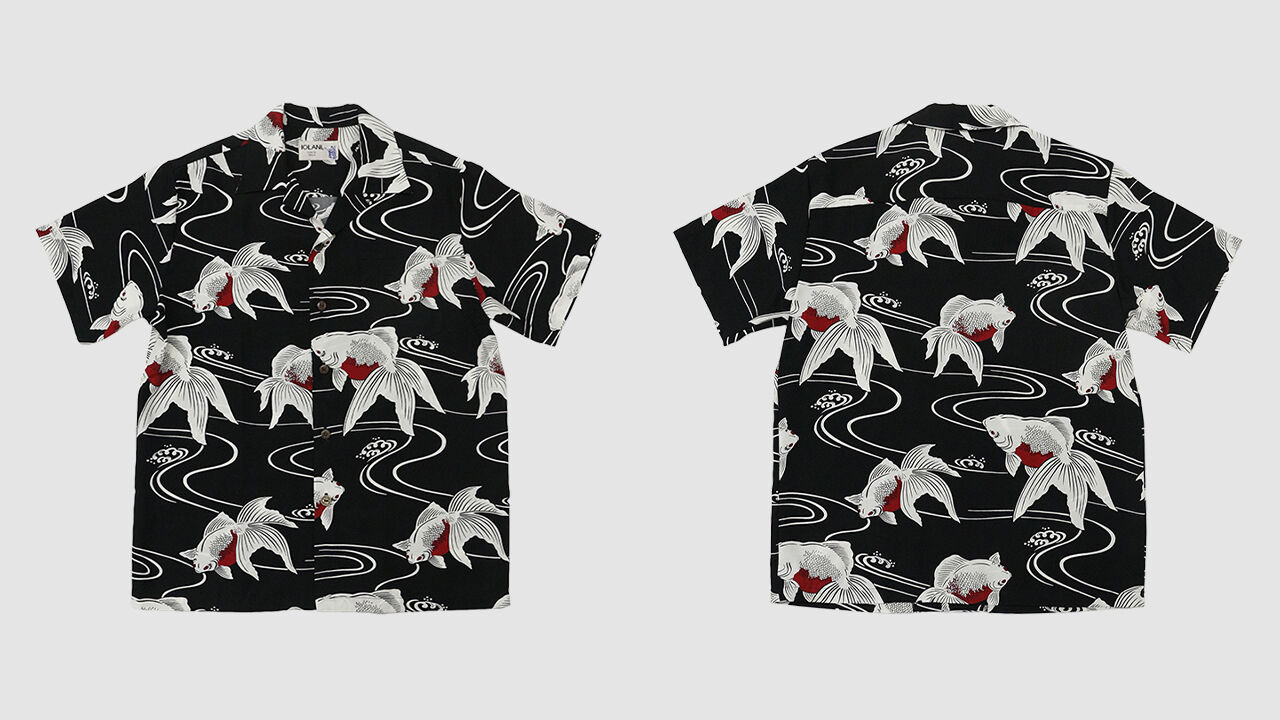 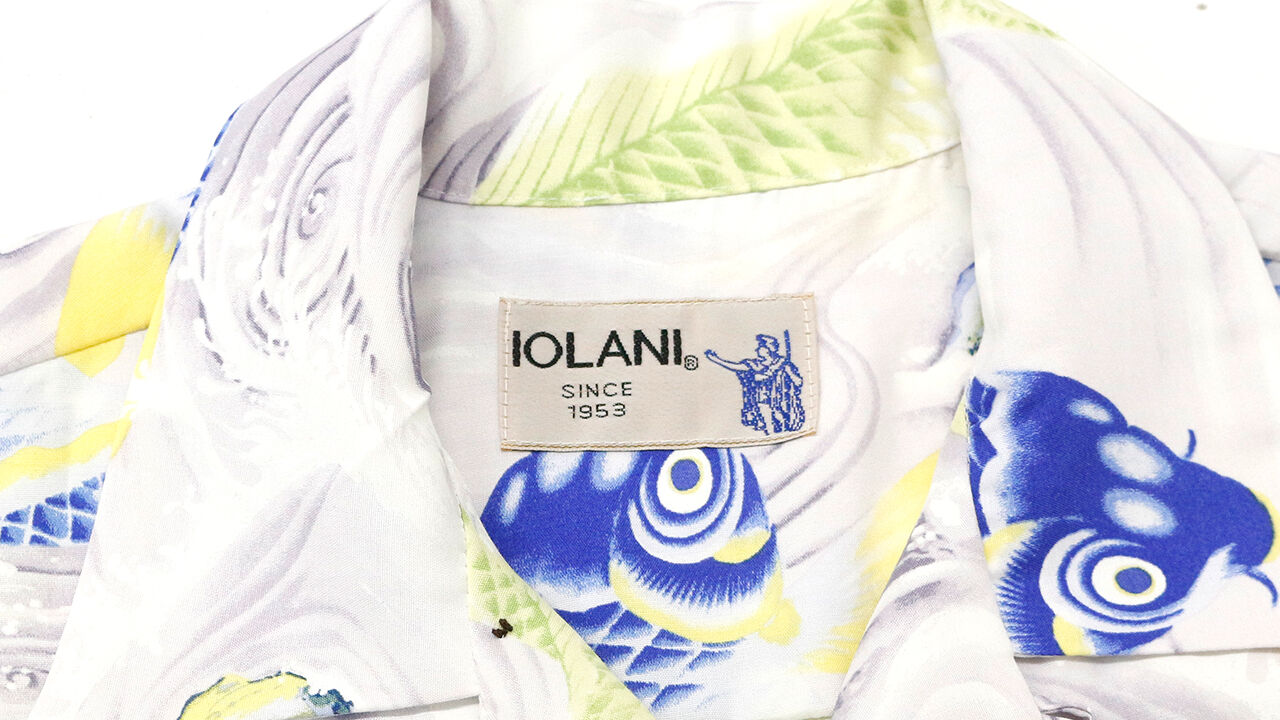 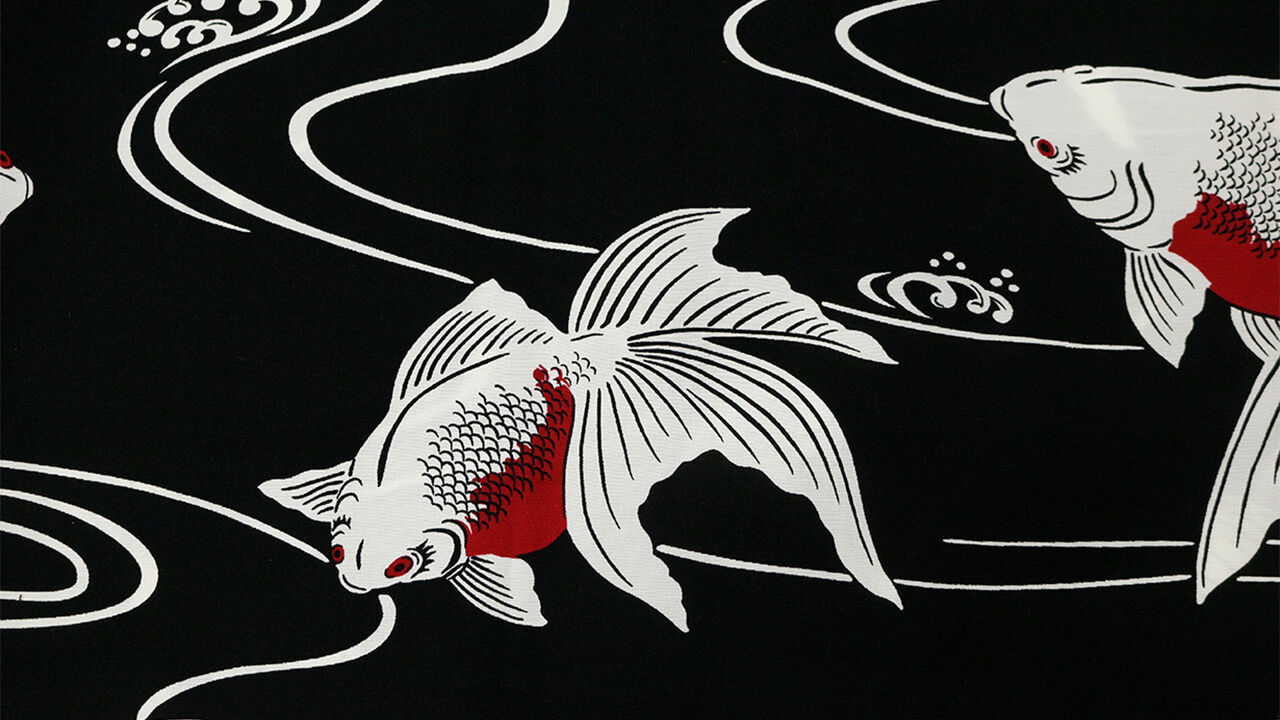 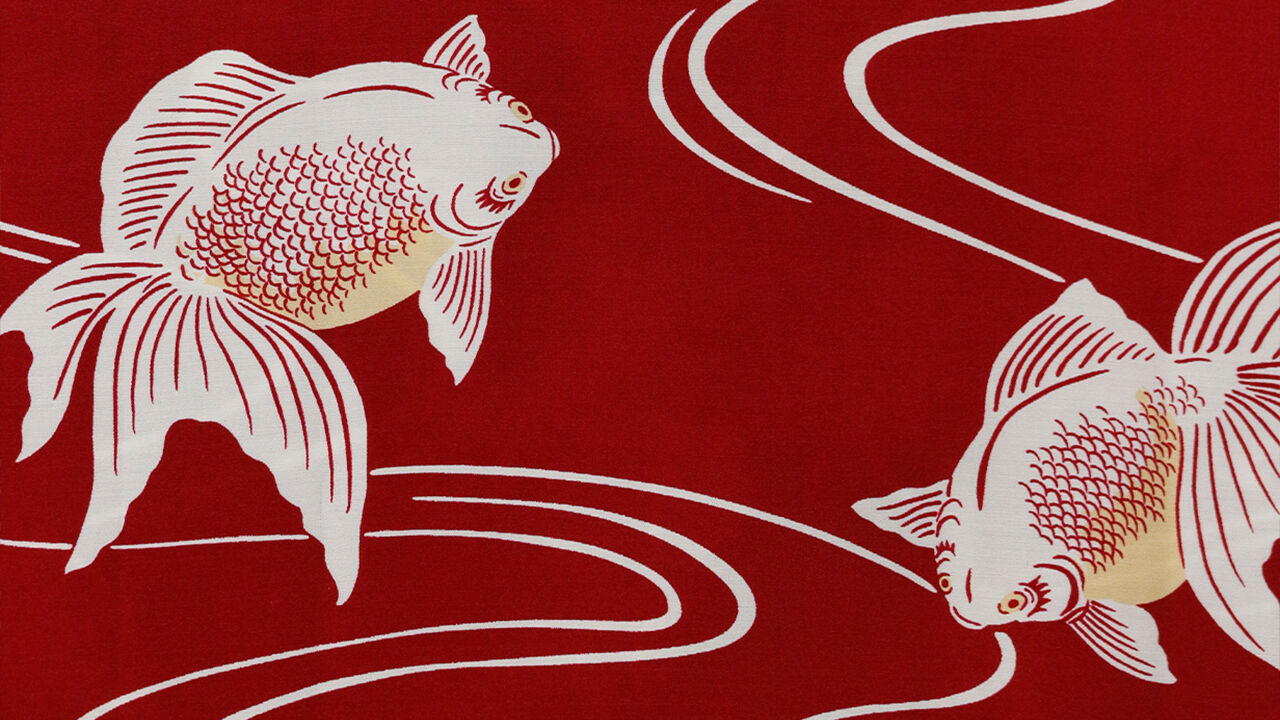 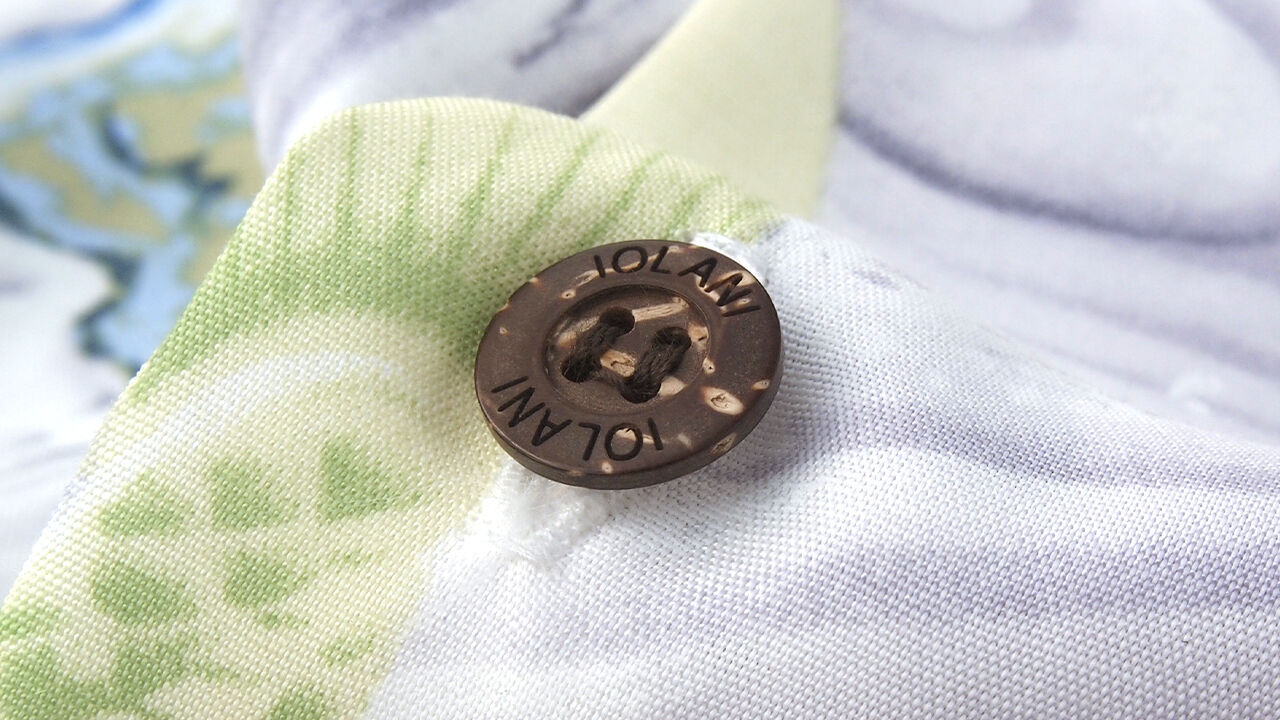 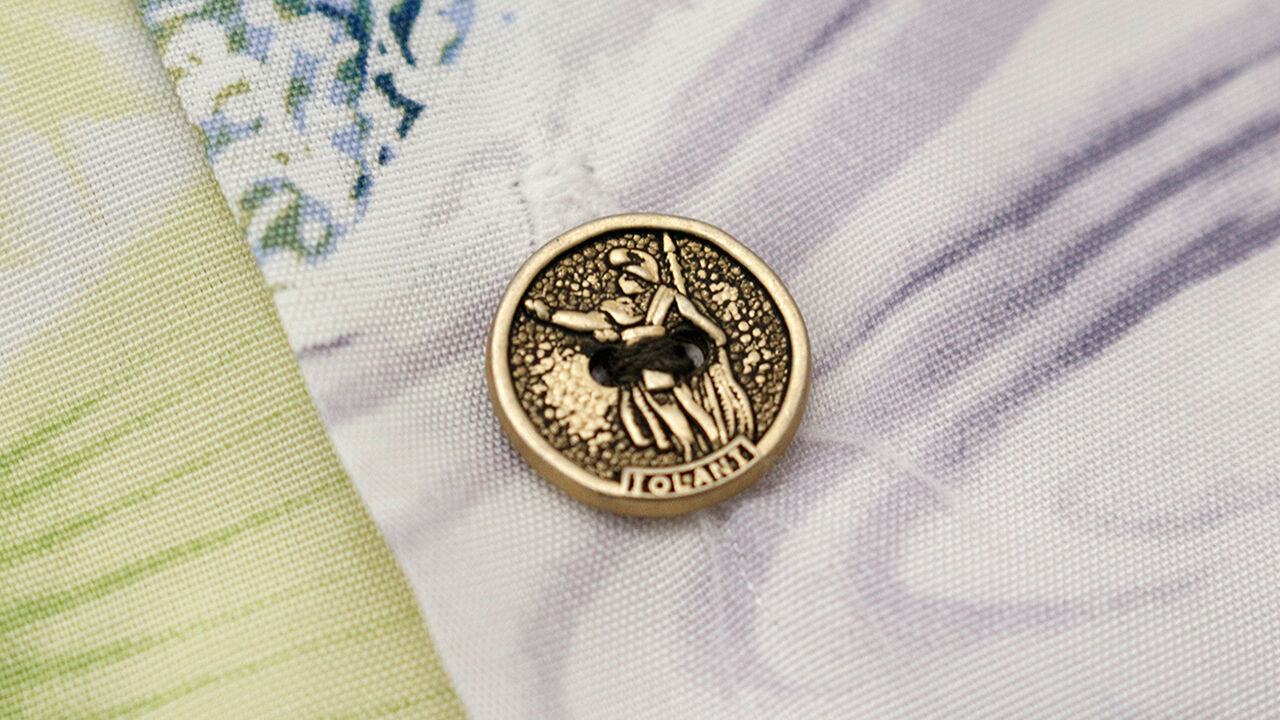 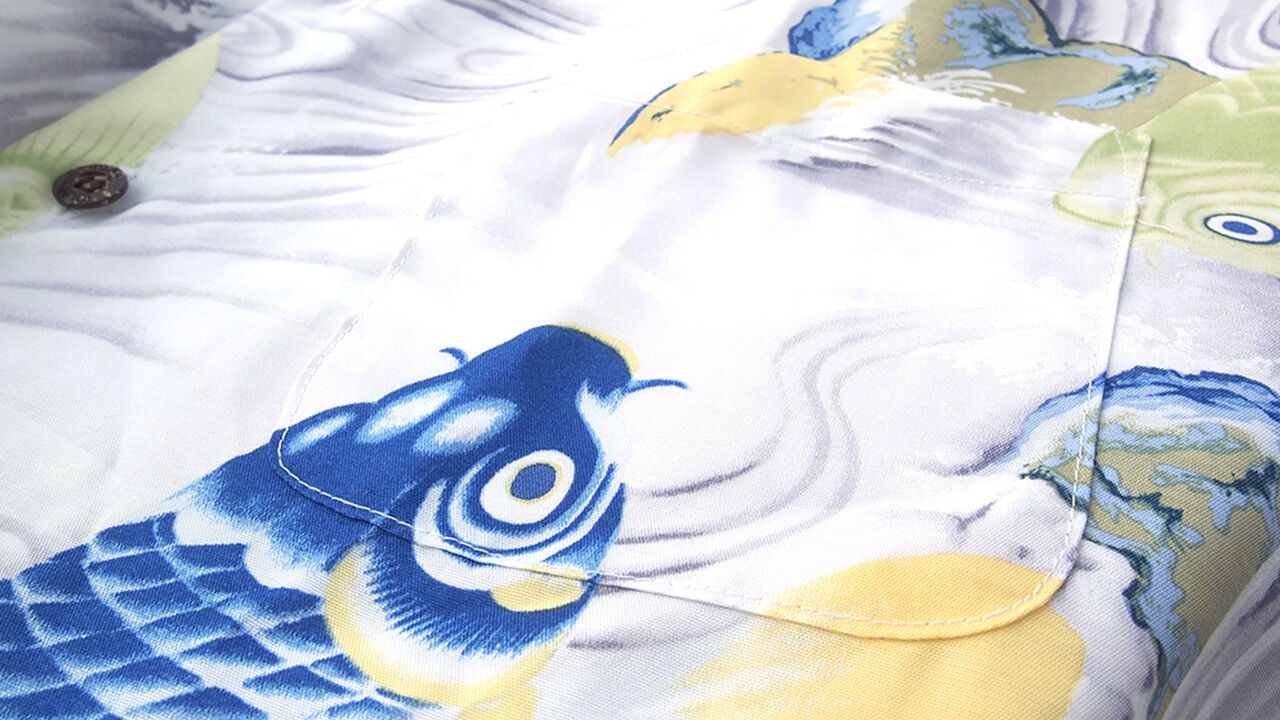 Made in Yokohama, Japanese patterned rayon Aloha shirt with carp and goldfish, made of a replica of a 1950s fabric from the long-established brand "IOLANI". This is a sustainable initiative to utilize stock fabrics. 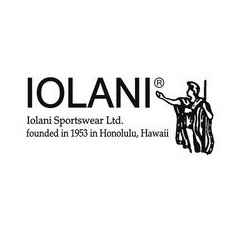 This aloha shirt is made by a Yokohama-based apparel company with IOLANI, a long-established brand of Hawaiian casual wear. The Aloha shirt, which some believe originated from the Japanese kimono, is made from a vintage replica fabric with a Japanese pattern. Please feel the charm of the aloha shirt, which may look flashy at first glance but actually fits in well with everyday use, with this product made in Yokohama.

The aloha shirt may have the image of being a Hawaiian garment, but one theory is that it originated from the Japanese kimono, which was worn by Japanese immigrants from the late 19th to early 20th centuries, who took the kimono they had brought with them and tailored it into a jacket style called a “palaka,” which was worn locally. Another theory is that it originated when local people, attracted by the beauty of the kimono, asked to have their kimonos made into shirts.

We are using a vintage replica of a Japanese pattern fabric that is believed to have been produced in the 1950s for this product. The rayon material, which is a requirement for vintage, is overprinted (a printing method that overlaps colors). The carp pattern depicts a carp climbing a waterfall. It represents success in life and is a pattern of good fortune. The undulation of the water on the ground is a touch reminiscent of an ink painting. Goldfish are known as a seasonal word for summer because of the coolness of the way they swim with their tail fins flipped, and the pattern is often used in summer kimono patterns. This fabric also has a cool atmosphere. Since the pattern is so special, we paid special attention to the matching of the pattern on the breast pocket and carefully sewed it so that the pattern looks connected and beautiful.

Attention is also paid to detail. The tag on the back of the collar is embroidered with King Kamehameha I. The fabric is rayon fujiette. The warp and weft yarns are made of different materials, and it has both the suppleness of silk fabric and the unique texture of rayon. The unique feathery feel of the surface is also a feature. Printing is done by overprinting, a technique in which colors are layered on top of each other. This is a technique that has been used since long ago, and many aloha shirts from the 1930s to the present have used overprinted fabrics.

The buttons are mainly the most popular buttons made from carved coconuts. Only the bottom button is accented with a pattern of old coins. This button was introduced around the 1950s and is said to have been used to give an upscale look to aloha shirts. Also in sewing, respecting the manufacturing method used in the 1950s, we adopted the "bag collar" style, in which the collar is sewn in a way that the seam is not visible from the front.

This sustainable aloha shirt was created by breathing new life into stock fabrics and reusing them. As a long-established brand, we are proud of the attention to detail in the production of these shirts, and we would be happy if you would take a look at them for yourself. Because we, Pinefield Japan, are based in Yokohama, we launched this project with a focus on manufacturing in Yokohama. Ohno Iryo, our parent company, is a long-established apparel manufacturer that offers casual wear brands with a Hawaiian flavor. Ohno Iryo’s stock fabrics were used for the aloha shirts.

IOLANI SPORTS is an aloha shirt manufacturer with a long history in the state of Hawaii. “IO LANI" means "Bird of Heaven" in Hawaiian, and the brand has valued Hawaiian traditions since its founding. We respect this attitude.

The sewing is done by Ando Sewing Co. The aloha shirts are carefully finished with the skills of skilled craftsmen cultivated in the workshop of this long-established company, which has been in business for 59 years.

We hope that through this project, which is a sincere effort to create good products, you will feel the spirit of manufacturing in Yokohama and the appeal of aloha shirts.

We are currently working on a project to realize the design and specifications with the factory in order to make better products. However, the design, specifications, size, etc. may change depending on the progress. Regarding the manufacturing schedule, we are currently adjusting the quantity assuming the success of the project. If you apply for a support purchase that exceeds your expectations, delivery may be delayed due to manufacturing process circumstances or unavoidable circumstances associated with delivery work. If there is a change in the content described on the project page as described above, we will promptly report it in the activity report etc. The schedule described in the text is the schedule at the time of project release. Due to the nature of support purchases, there is a risk of delivery delays. As a general rule, support purchases cannot be canceled due to delivery delays, but if it exceeds 3 months from the scheduled return delivery month, only those who wish to do so will be canceled. As it is made to order, we cannot accept exchanges or color changes. In addition, we cannot accept returns, so please be aware of this before purchasing. We have thoroughly inspected the product before shipping, but if you find any significant stains or damage, please contact us from [Inquiry to the executor]. Finally, all the team members will do their utmost to make everyone happy with the support and purchase of this project. * Although we have fully confirmed the implementation of this project, please understand that similar products may be discovered.
Read more
For questions specifically to this maker please submit a request below.
Inquiry to Maker

Product variations such as color or size can be chosen after pre-ordering. Customers will receive an e-mail to select their product preference.

Product variations such as color or size can be chosen after pre-ordering. Customers will receive an e-mail to select their product preference.

You must be of legal drinking age in the UK to pre-order this product.

Sorry, you are not allowed to purchase this product.

You need to be 18 or older in order to purchase this product.

Seek the unique from Japan

Discover the fusion of traditional craftsmanship and modern design.

Makers only produce what is sold during the pre-order window to avoid excess production. 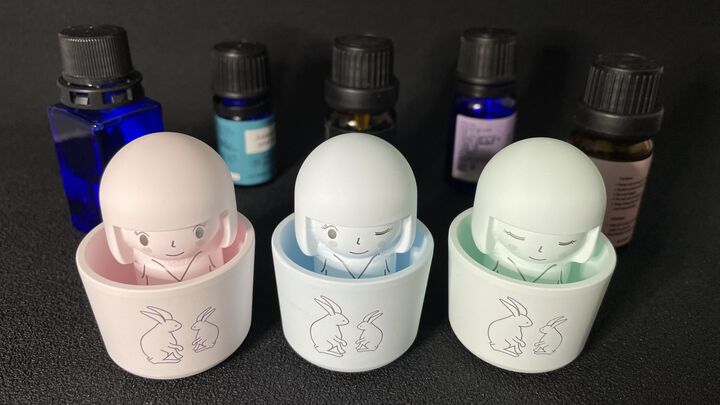 This character-shaped aroma stone allows you to enjoy aromatic scents without electricity or fire. 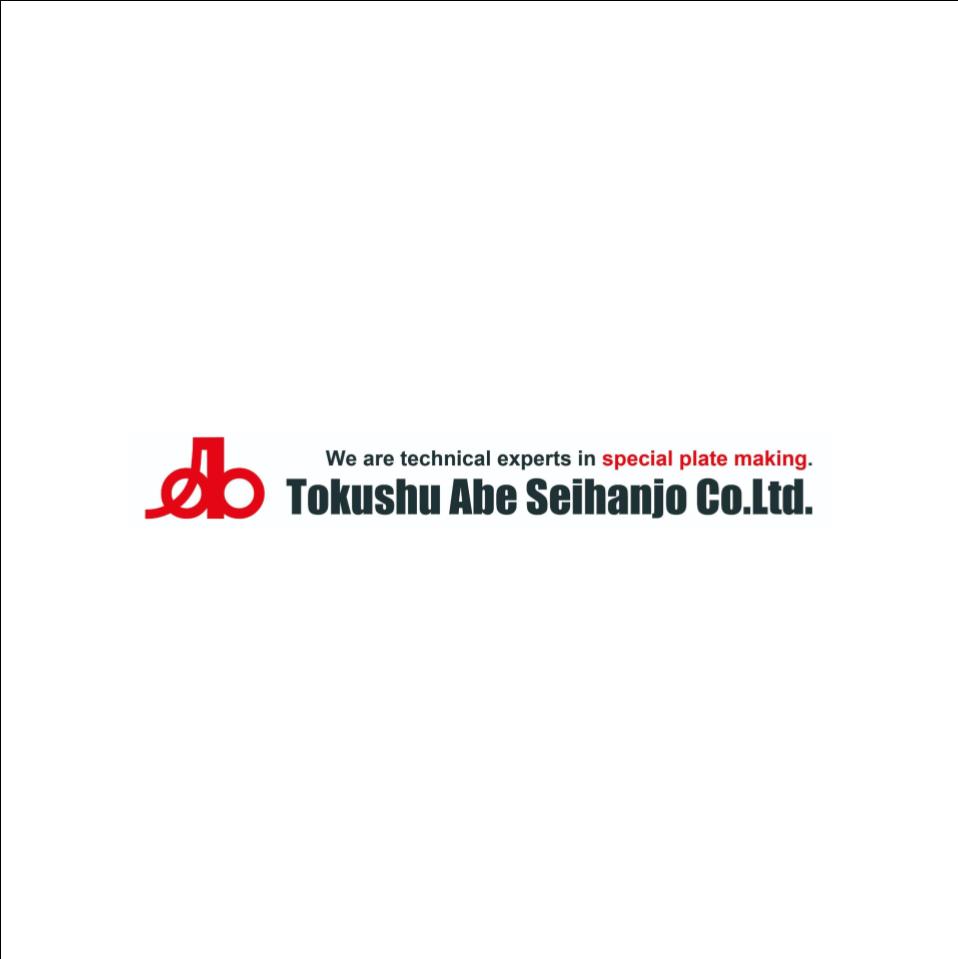 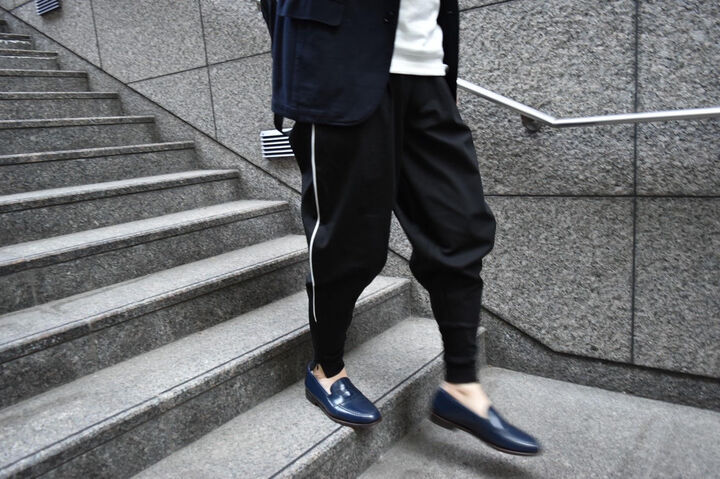 Modern re-production of knickerbockers with roots in European immigrants in New York and loved by Japanese scaffold workers. Made of recycled material. 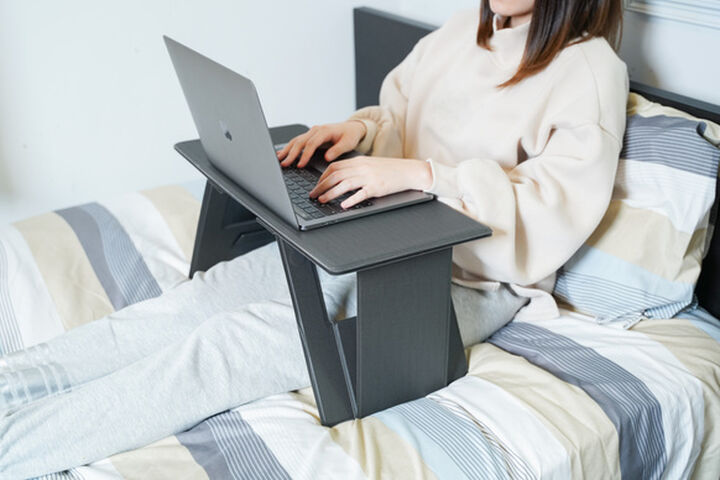 PC stand integrated with desk space for comfortable PC work even in bed or on a sofa.

Be the first to know